Two weeks ago I, Jessica Hoy was in fact miss connected. It was an adorable post sent by someone who saw all the awful things the internet trolls were saying about me. I was absolutely crushed by the comments I found from strangers who had seen my blog in the Calgary Metro News. Seeing this sweet missed connection on Kijiji cheered me up immensely. I have said from day one that if I got a missed connection that I would reply, even go on a date with the poster depending on how strongly my "I'm about to get murdered and chopped into bits" radar went off. I emailed the poster thanking him for writing such nice things and told him that he had made my day. A few hours later he responded saying he was sorry about how mean people were to me and that he is glad I'm not letting them get the best of me. He gave me his name, which as a slightly crazy girl I did what every slightly crazy girl does, I googled, facebooked, and twittered the hell out of him. He clearly gave me a fake name, unless he is actually a Roman Emperor or character from Gladiator. He does not exist on any social networking sites. I emailed him back asking him a couple questions about himself which is when I got shut down. Rejected. Dismissed. Cast aside. Refused. I could go on forever thanks to thesaurus.com but I won't. Two weeks have passed and the Roman Emperor has not returned my email so here I stand, 9 months into my challenge, starting at square one. Yes, I was rejected by a Kijiji poster, but we aren't even gonna pretend that this is the most pathetic my social life has ever been. Hell, this isn't even the most pathetic I've been this week.
-Miss Connection
Posted by MissConnection_ at 4:40 PM No comments:

I know I said I had been miss connected like a week ago and it was a complete joke, so you probably aren't going to believe me when I say it has happened for real this time! No, I'm not the girl who cried Missed Connection! Check out what I saw this morning when I did my customary Kijiji search... 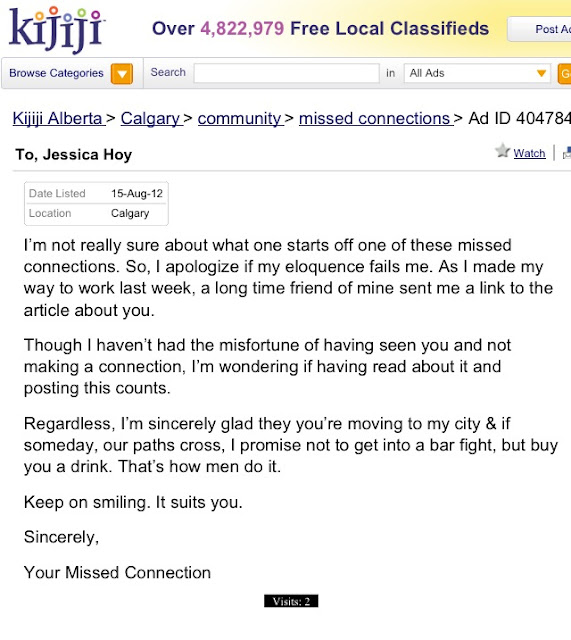 I don't think this counts because I didn't actually have a moment with this man...yet. I'm getting closer though! I'm gonna respond so stay tuned!
-Miss Connection

Posted by MissConnection_ at 9:57 AM No comments:

I'm at the gas station putting diesel in my car when a concerned man says "Umm did you know you are putting diesel in your car?" This happens all the time since my little car doesn't look like all the other vehicles at the diesel pump, this time was different because the man was really cute and he didn't make eye contact with me, he was openly staring at my boobs. I realize this is something that happens to women all over the world all of the time, but this is the first time this has ever happened to me because honestly my eyes are almost the same size as my boobs so men are usually not tempted to break eye contact. I was thinking I must be looking hot in my new tank top. I went inside to pay and I caught the older lady working at the gas station staring at my chest as well. Strange. As soon as I got outside I looked down and saw that the strap from my purse had pulled my shirt down exposing my sexy flesh toned, bra covered, left boob. I can picture the missed connection now: "You were the hot mess at the gas station exposing your matronly flesh toned tattered bra, if you think this is you pull yourself together and please don't respond. Signed the Hottie at Pump 3".
-Miss Connection
Posted by MissConnection_ at 4:48 AM No comments:

This Is Not A Drill! I Have Been Miss Connected!! Sort Of...

Well folks, I think I have been miss connected! It only took me 8 months but here it is! 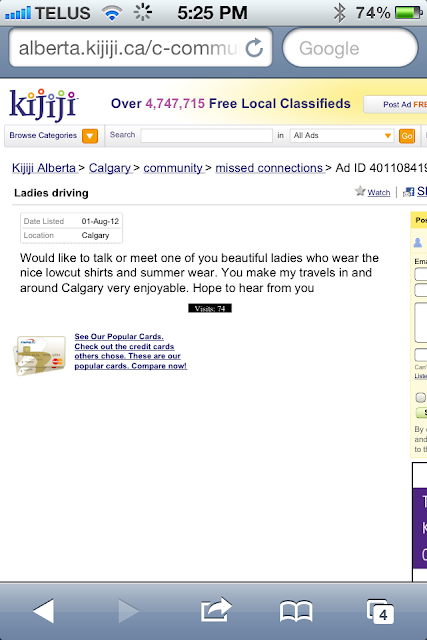 I totally wear summer wear and I am a lady who drives in and around Calgary! Sometimes I even wear a nice low cut shirt! So what do you think? Should I respond? I already know the safe answer...
-Miss Connection